Do You Want Fries With That? 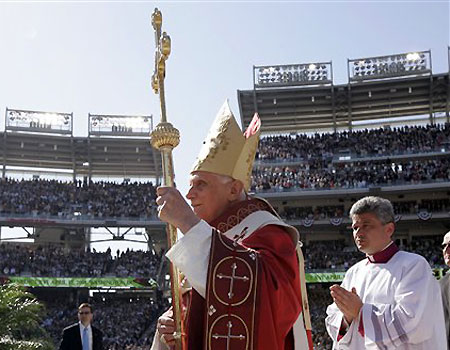 A cleric friend of mine reports in from the papal Mass in DC:

“I was distributing communion on the first level on the South Capitol side of the stadium. About 10 minutes into distributing communion, I start smelling burgers, popcorn, pizza, etc. I turn around and see that all the concession stands have raised their gates and were selling food! And people were in line! Now I didn’t have anybody come to me with a hot dog in their hand, but with length of these lines it was clear people were receiving communion and then going for a pizza.

The concession stands were open until right before Mass. Then they reopened during communion. I figure the stadium staff didn’t know any better and thought it was something akin to the 7th inning stretch. And why shouldn’t they? To non-Catholics, nothing seemed prayerful about the Mass. With the “Benedetto” chants erupting after his homily, and a failed attempt to begin a wave, the music, the disposition of the assembly…. Why wouldn’t they think “Oh, they’re taking a break, let’s sell some burgers.”