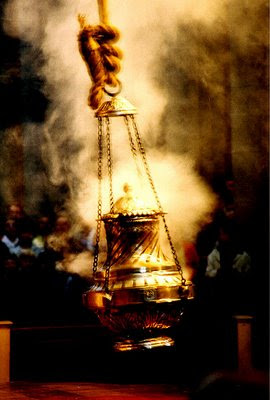 Well you can’t get more incense than the Botafumeiro.

July 25th is the feast day of St. James The Greater. At Santiago de Compostela Cathedral in Spain, they celebrate the feast in style. There is so much incense there that there must be no nonsense with at 20 mile radius during the mass. What is it that contains so much incense? This magnificent thing:
The Botafumeiro (literally the smoke boat) is a nearly six foot high thurible that is swung by a pulley system that would be a personal injury lawyers favorite dream were it here in the litigious states of America. Truly magnificent.

Taylor Marshall, from Canterbury Tales, writes about his visceral reaction to the Botafumeiro.

As I said last year, one of the best things about being Catholic is being in communion not only with the Holy Father, but also with the Botafumeiro itself. Catholic brothers and sisters, if you ever become discouraged, just know that there is a incense thurible over six feet tall swinging around in a Saint James Compestella in Spain. No other religion would dare to have something so awesome.

Anyway, check out the Botafumeiro in action. Too cool.