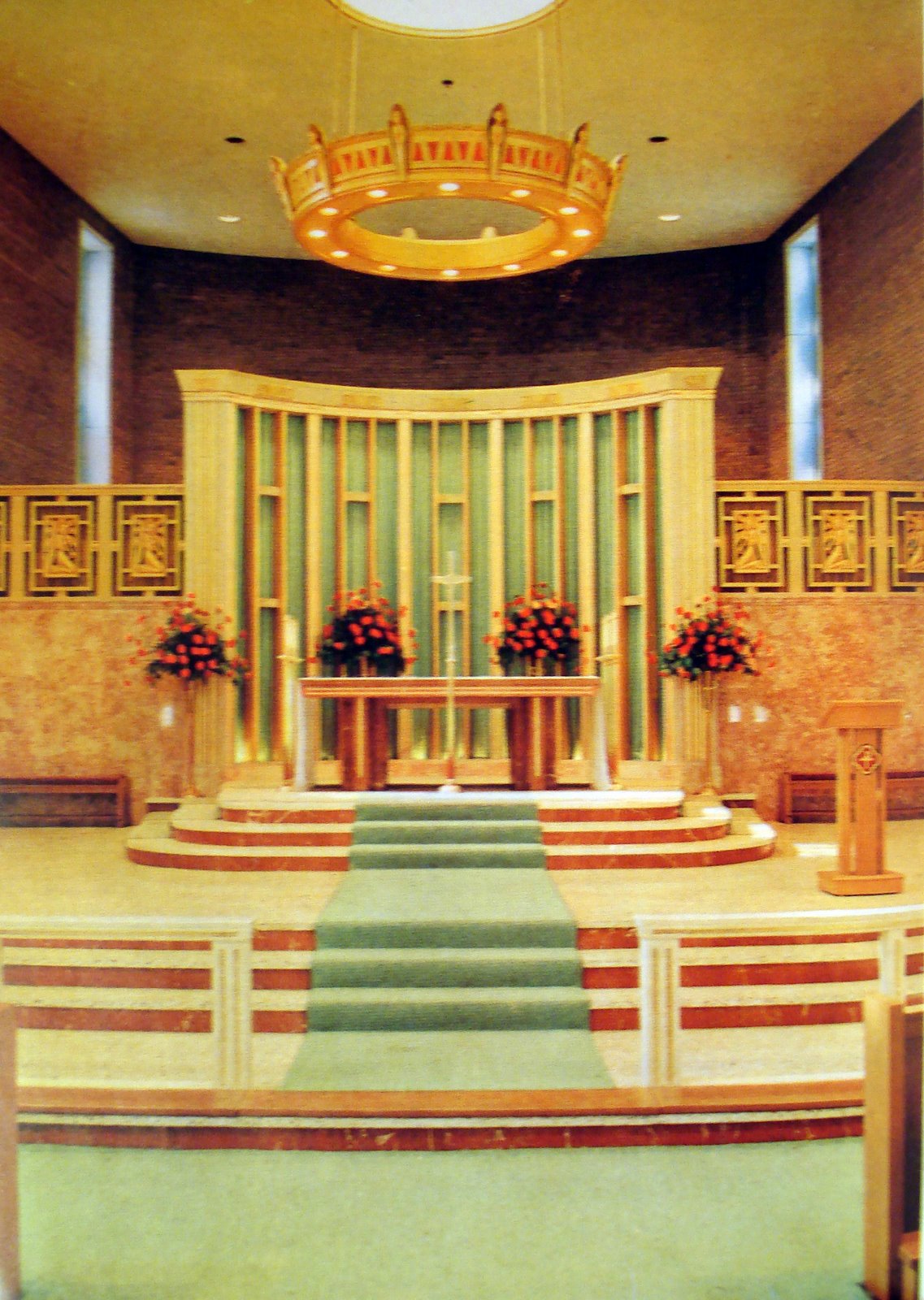 I visited home for Thanksgiving and ran across the copyright 1974 children’s hand missal I was given when I received my first Holy Communion in 1976. I hadn’t seen it in years, and after all the talk about the “Benedictine” altar arrangements, I saw the missal’s photos in a new light. Here’s something of an “in between” stage in the development of altar arrangements. Tall floor candlesticks stand on the sides of the altar. The altar cross, supported by a stand on the floor, remains in front facing the priest-celebrant. The one extra candle on the altar in front of the cross is a bit perplexing. The only thing I can think of is that it is the seventh candle intended for pontifical masses. Any ideas out there?

Interesting to note also is that this is a pretty nice church, despite its obvious Modernist simplicity. The hanging crown-shaped tester over the altar is custom-designed with carved angels all around it. The round skylight above shines right through the tester, suggesting an opening from the heavenly realm derived from the baroque. Even the little can lights in the ceiling are arranged in a circular pattern around the tester. There is a natural focus on the altar rather than the congregation, and the screen behind has low relief carved plaques with images of angels in adoration.
My guess is that the choir was located behind the screen and its curtain, something which was pretty common in the better churches of the 1960s. The idea was to reconnect with the placement of the choir near the altar found in some early Christian basilicas. The walls of the church are covered in large sheets of marble on the lower level. The altar rail is present even as it becomes the least possible barrier. Even the priest’s obviously modern vestments are pretty darn well-made. The servers are vested properly.
What we see here is good liturgical modern… one might say it shows a hermeneutic of reform rather than discontinuity. The liturgy and the church are seen here as important and sacral. Even though modern, the church building has not been redefined as a meeting house. This is an important distinction. Though its symbolism is minimal, the fundamental understanding is still intact. This is a whole different animal from the “skin for liturgical action” that was promoted in the late 70s through the 90s. I think as time goes on we will have to become more discerning about “modern” and “traditional” and realize that a church building either brings due honor and dignity to the rites or it does not. I think this one does.
At least until the folk choir showed up: