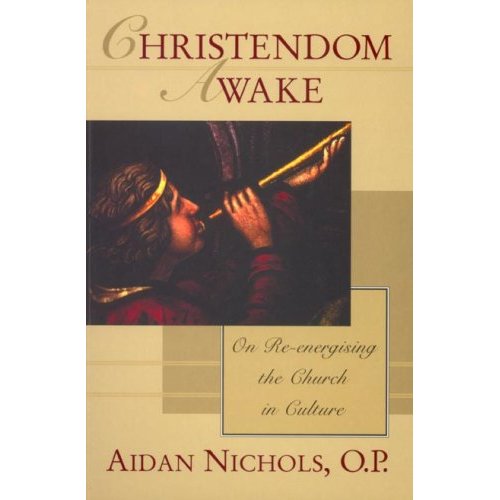 Its ten years old, but its worth a read. Fr. Aidan Nichols, a leading voice in Catholic cultural and intellectual renewal, wrote “Christendom Awake! On Re-energizing the Church in Culture” in 1999, but its crystal clear prose and high ideas are still worthwhile today. For some reason, it hasn’t seemed to have the publicity and readership its deserves. Maybe CMR readers can do something about that. Some sample chapter titles include “Re-enchanting the Liturgy,” “Relaunching Christian Philosophy,” “Rethinking Feminism,” and “Resacralising Material Culture,” and “Remaking Religious Life.”

Here’s sample on church architecture:
“For unless a building arouses visual delight and satisfies a thirst for order–two foundational features of any material environment congruent with man’s nature as a sentient yet rational being– it is most unlikely that it will have the wherewithal to function as a sacramental sign.”

Another sample on abortion in a chapter called “Rescuing the Holy Innocents”:
“The abortion issue is greeted by many Catholics with a resigned sigh– resigned because there seems little that can be done to shift attitudes…and a sigh because the reiteration of the moral point from the pulpit or elsewhere seems so predictable as to be banal. What such people need is the reawakening of their Christian imaginations to the implications of the topic.”

So if you need a good read for the new year, consider Christendom Awake! Ten years later, we’re still a bit groggy, but asleep no longer. This will help get you going.