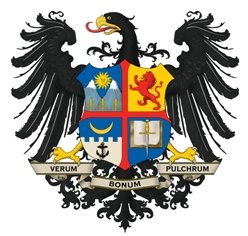 I had the good fortune to be at the Wyoming Catholic College this past week for their patronal feast, and came away quite impressed. Its a newly-founded place with only about 60 students at the moment (only freshmen and sophomores–they’ve only been operating for 2 years). It is modeled in some ways on Thomas Aquinas College in California, with a classical curriculum, though in their rugged Wyoming landscape, a strong component of outdoorsy knowledge is part of the deal. One of the first things I participated in when I arrived was a college-wide game of “QuisQuid” which was something like a cross between Trivial Pursuit, Twister, and a game show. The students were divided into three groups representing mind, body and spirit: the philosophers, the cowboys, and the poets. They came marching in wearing togas and boots and black berets, respectively, all with a great sense of fun and community. Each team was given a series of intellectual and physical challenges ranging from reciting the prologue of the Gospel of John from memory (which one student did entirely in Latin) to analyzing topography maps to acting out scenes from the Odyssey. The team that won got to sit in a big 1970s-style arm chair covered in a sheet labeled the “sede sapientiae.” The faculty served as judges and it was all great, nerdy Catholic fun.

But lest you think the students are a bunch of frail intellectuals, it’s worth noting that they also go on intense hikes in the mountains (including building igloos in -30 degree weather) and everyone has to complete the “horsemanship” training program. The faculty has impressive credentials–many of them coming from TAC and the International Theological Institute in Gaming, Austria. One of the professors told me that he came to the WCC after 40 years in teaching, and that the college provided exactly the kind of student he was looking for all these years. That was certainly my impression as well.
The students I met seemed well-adjusted and very friendly, surprisingly like any cross section of 18 and 19 year olds. The Mass I attended was very reverent, and the student choir impressively good for such a small student body, singing motets by Bruckner and Palestrina as well as plainchant. I was told they routinely alternate between the English and Latin use of the Ordinary Form as well as a weekly use of the Extraordinary Form of the Mass.
There isn’t much to look at by way of buildings yet–they are currently based at a nearby Catholic parish. But they own a beautiful piece of property and have a grand initial plan to build a campus, which, from what I can tell, is still under development and may turn out to be a bit more traditional than the current images show

So if you’ve been getting the mailings as I have about the college and wondered if it was worth supporting or sending your kids there, I’d give it a big thumbs up.