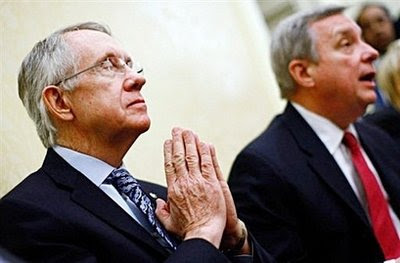 It seems that enough Senators have agreed on an economic stimulus plan of at least $780 billion. President Obama insists that the bill will rescue the U.S. economy from sinking into an even deeper recession.

Three Republicans agreed to join Democrats who control the chamber in supporting the measure.

However, President Obama’s economic recovery package will actually hurt the economy more in the long run than if he were to do nothing, the nonpartisan Congressional Budget Office said. The result they say is so much government debt that it would actually harm the economy in the long term.

So why are we believe the Spendulus bill is good? Because Obama says it will. That’s why. And over the past two weeks we’ve seen the support for this bill eroding. And that’s why the Dems are hurrying this to a vote because they know that the faith in The One is eroding.

I think the first two weeks of Obama’s presidency have been a pretty clear vision of how the cult of personality fails when it meets a little something I like to call reality. When Obama got into office the world was supposed to bow down. Obama sent a love note to Mahmoud Ahmadinejad. But the lunatic in Iran didn’t well up and change his ways. Far from it. He declared victory and started calling America names.

And this week, under orders from Moscow, Kyrgyzstan’s president announced that his country will be closing the sole American air base in Central Asia. The Manas Air Base is a crucial transit point for supplies and NATO troops going to Afghanistan.

But now Obama must believe that at least the economy will bow down to him and obey. Why? Because he said so.

I’m starting to think that the further we get into Obama’s presidency, the more he’s going to seem like Kevin Bacon from Animal House.