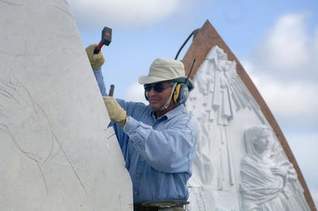 Ave Maria University announced on February 13th that they had hired Márton Váró, “a world renowned Hungarian sculptor” to carve a 35-foot tall, 50-ton Carrara marble sculpture of the Annunciation over the entry of the infamous and much criticized chapel which forms the center of the Town of Ave Maria, Florida. Váró is perhaps best known for his giant angel figures which adorn the Bass Hall in Fort Worth, Texas shown here.
The Fort Meyers newspaper News-Press reported on the sculpture, noting that the marble for the sculpture was taken from the same quarries used by Michelangelo. The Ave Maria University press release, showing no sign of timidity, opened by stating their hope that it would compare with Michelangelo’s Pieta and David . The cost: about $3,000,000. The University has cleverly set up a web came so that people can follow the progress of the sculpture. See it by clicking here (not much to see yet).

As for commentary… well, the general consensus about the chapel is that it is a well meaning but bizarre sort of disappointing farce of an architectural thing. See the video below that Ave Maria is showing on its web site: floating steel beams, etc. The new sculpture, however, will be another sort of a creature. Váró is indeed one of the best (and only) sculptors around these days who has a track record in monumental stone works like this. He’ll do something pretty good by today’s standards as the background of the image above hints.

But here is the larger question: Should the front of a church become a giant billboard for an over sized piece of devotional art? I think the answer is no. It shows a general lack of understanding of what a church facade is: the entry portal to the Heavenly Jerusalem. The great Gothic cathedrals of France show this beautifully: the arrangement of kings and saints above, with Christ the judge over the center door surrounded by the angels and saints. Isolating one point in sacred history and using the church as a sort of giant screen for a marble drive-in movie isn’t really the best approach. But perhaps the beautiful marble and the skill of the artist will (mercifully) draw the viewer’s attention away from the bizarro-world qualities of the church building itself.