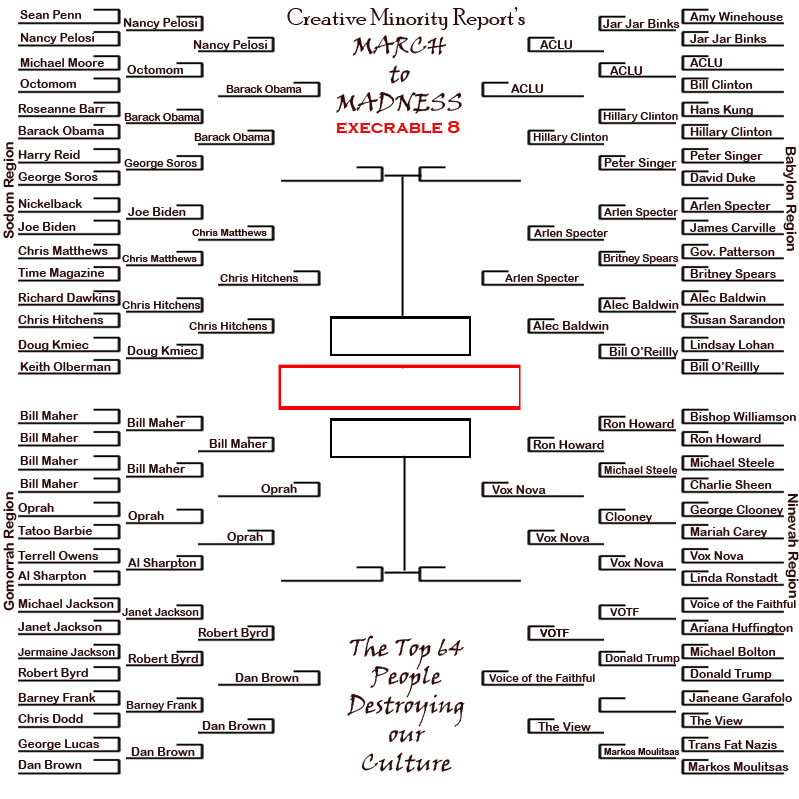 Nacy Pelosi was the clear favorite over Octomom and did not disappoint. While Octomom clearly is no role model, her contribution to the ickification of our society pales in comparison to what the Speaker of the House does daily. Pelosi, as ranking partisan in the House of Representatives, continues to champion the spendapalooza, advocating abortion on demand and ESCR all while correcting the Pope on what the Church really teaches. For this, she has clearly earned her place in the Execrable Eight

Obama also easily triumphed over George Soros. While Soros is truly one of the more despicable characters with his determination to spend his considerable wealth on every liberal cause, it is dwarfed by Obama’s willingness to do the same with your money, your grandchildren’s money, and money that hasn’t even been printed yet. No contest.

Christopher Hitchens takes down Chris Matthews by virtue of the fact that Hitchens singular purpose is too attack God and he sells a lot of books doing it. Matthews lost because not even God watches his show anymore.

As nasty a piece of work as is Bill Maher most people people actually recognize his pathos and his reach is limited by it. Oprah, on the other hand, spreads her gospel to millions who fail to see the truth. Because of this she is the clear winner in this contest.

Dan Brown takes down the ol’ Ku Klux Kodger of the Senate. While they both lie with impunity, people actually believe Dan Brown. His particular brand of anti-Catholic anti-historical fiction give him the edge here.

In this hard fought contest the ACLU edged out Hillary. Hillary has been reduced to a mere minion of the One, while the ACLU still is actively destroying our civil liberties while claiming to defend them.

While Baldwin’s loony liberalism and bad parenting skills certainly do not endear him, Arlen Specter’s negative influence is far greater. As the great enabler of the Democrat juggernaut in Congress, this turncoat republican deserves his spot in the Execrable Eight.

The fight between Ron Howard and Vox Nova went into seven overtimes but in a stunning upset Vox Nova pulled it out in the last minute with a startling play in which they claim that gay civil marriage is ok as long as we (the Church) don’t sanction it. That is a buzzer beater.

Tough choice in the battle between VOTF and the view. One group is composed of a bunch of secular loud mouth biddies that deride anything holy, mock the Pope, and are nauseatingly shallow and the other is the girls of the View. But at least the view is not pretending to be something it is not, Catholic. The win goes to the VOTF.

So there you have it. Who are your final four?