Obama’s Quote of the Day

Obama demands silence from dissenters: ‘I don’t want the folks who created the mess to do a lot of talking. I want them to get out of the way so we can clean up the mess’…

What?! Do Presidents get to demand silence? I mean, that’s the funny thing about democracies. They’re not supposed to be silent. Healthy democracies are argumentative, boisterous, and a bit in your face. Silence is a characteristic of brutal dictatorships.

I’ve always said democrats view the people as children, to be seen but not heard. 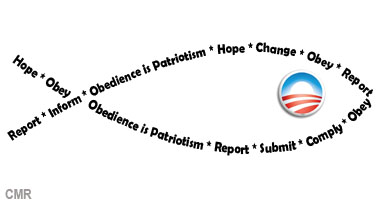 It reminds me of some old Simon and Garfunkel lyrics:

And in the naked light I saw
Ten thousand people, maybe more
People talking without speaking
People hearing without listening
People writing songs that voices never share
And no one dared
Disturb the sound of silence

Hey, just imagine for one second if Bush had said this about national security after 9/11. Just imagine the outcry. Remember all the “King George” comments?

So to recap, Obama in the past few days has asked for snitches to report on fishy Americans who might stand in his way. And now he demands silence.

Anyone else starting to get a little nervous?