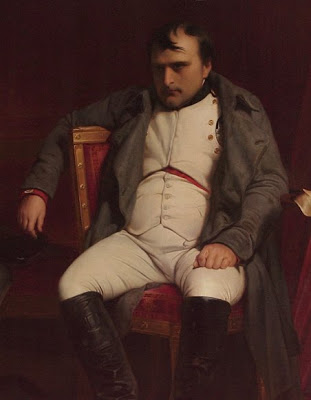 When asked how he’d grade himself after Waterloo, Napoleon famously said, “A good solid B +” and then promptly got on the bus to Elba.

Right before the end of the Battle at Little Big Horn Custer grabbed a pen and wrote down the grade he thought he deserved. “B+” he proudly proclaimed and then promptly screeched, “Aghghghahayahabhdhdhdfhhhghgghghzklpa that really hurts” upon which he died.

And of course, when the Boston Red Sox were just one out away from winning the World Series in 1986, some fan shouted out a question asking Bill Buckner how he graded his work thus far. “Good solid B+” he shouted back smiling, already smelling the champagne chilling in the locker room. And he believed it…until right around the time Mookie Wilson came up to bat. To this day, Bill Buckner gets the dry heaves when anyone even mentions champagne.

And just yesterday, President Barack Obama graded his work as President as a B+. Maybe he’s grading on a curve. Or maybe it’s all about those made up jobs created and saved in the 57 states.

But let’s face it, the guy’s been rewarded for his non-accomplishments for years. Maybe if he’d just increased the deficit a wee bit more he could’ve seen fit to give himself that A. Or if he’d been able to do nothing about Afghanistan a month longer. Or if he called more policemen stupid. Or…