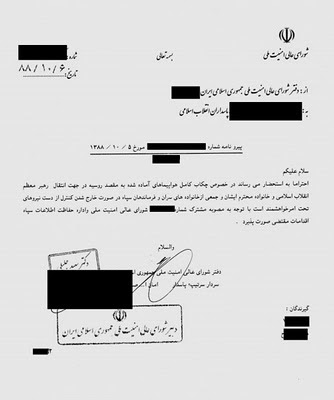 One person who isn’t sure is Ayatollah Khamenei. Reports say that he has a plane fueled and ready to go if things go from bad to worse.

By way of Gateway Pundit we see this letter posted via Planet Iran.

Re: Response to a letter number [redacted] written on the 5th of Dey (December 26th).

With respect, we would like to inform you of the inspection, check up and preparation of the aircraft, destination Russia, for the purpose of transporting the Supreme Leader, his esteemed family and various officials of the Revolutionary Guards. Should the commanding forces lose control, direct your attention to the attached permit, number [redacted] of the National Security Agency and the Bureau of Revolutionary Guard’s Intelligence Security in order for the necessary steps to be taken.

I don’t what we would end up with in Iran if the regime falls, but it is hard to imagine it could be worse that what we have now.

We should pray for the Iranian people that this bloody clash ends with minimal casualties and with freedom as the victor.