Spidey as The Hobbit? 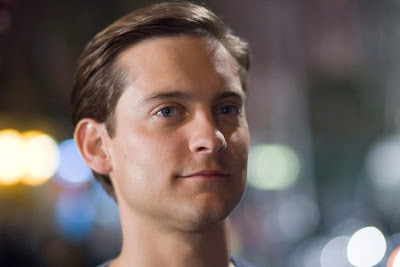 Many Catholics hold a very special place in their heart for The Hobbit and the Lord of the Rings trilogy.

I think most people were thrilled with how LOTR turned out but now they’re making “The Hobbit” into a two part movie and everyone’s worried that it’s gonna get messed up.

I’m wondering what you’ll think of this news? Tobey Maguire of Peter Parker fame has pulled out of the Spiderman franchise and has agreed to play Bilbo Baggins.

Tobey kind of looks like Elijah Wood so he’s got that going for him. But I know folks have real strong feelings about Bilbo and don’t want to see it messed up.

Last month, the rumor that Tobey Maguire was interested in playing Bilbo Baggins in The Hobbit first hit the online world (courtesy of Latino Review) before being quickly shot down by Tobey himself as being nothing more than internet hyperbole. Though perhaps there really was something to it, as multiple sources are today claiming that Maguire has officially joined The Hobbit as that film’s lead, Bilbo Baggins (originally played by Ian Holm in the Lord of the Rings trilogy).

The main source (which, truth be told, isn’t the most reliable) is Britain’s The Sun, which uses a full page article to announce the news that Maguire has indeed come on to play Bilbo now that he’s no longer needed in the Spider-Man universe. According to The Sun, a source told them the following: “Everyone is over the moon. Tobey is not only one of the most recognizable faces in Hollywood, he is also one of the best actors.” Adding to the “Yes, he’s in!” pile, AMC Entertainment blogger John Campea recently tweeted that someone close to production has leaked the same news to him. He said, “I have been personally told by a source very close to Guillermo del Toro that it’s true… Tobey Maguire IS The Hobbit.”

I think I always saw Bilbo as a little older…a little more seasoned than Maguire so I’m not so sure. But on the other hand I did like Maguire in Seabiscuit and thought he was a great Peter Parker. But as Bilbo?????