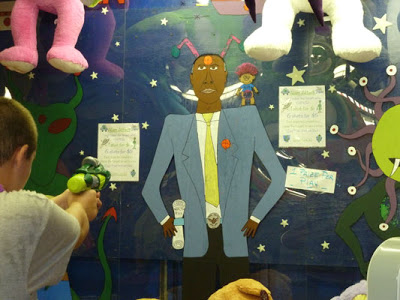 OK. I don’t even know where to start with this one. There’s so many things wrong with this that it’s almost comical. Almost. A church fair in Pennsylvania had a game that asked you to shoot the alien. Take a look at the game below and you tell me who you think the alien looks like.

The president of a Hellertown-based amusement company apologized Wednesday for a target shooting game depicting the image of a black man that appears to be President Barack Obama.

Irvin Good Jr., president of Goodtime Amusements, said he did not intend to offend anyone by offering the game, called “Alien Attack,” which recently appeared at the Our Lady of Mount Carmel Big Time Fair in Roseto and sparked a complaint.

“I guess we made an error in judgment and we apologize for that,” said Good, who has had the game for about six weeks. “I voted for the man. It wasn’t meant to be him. If they took it that way, we apologize.”

The game depicted a black man dressed in a suit holding a rolled up piece of paper labeled, “Health Bill.” The man also sported a belt buckle fashioned after the presidential seal. Participants shot darts at targets, located on his head and heart, to score points and win a stuffed animal prize.

Two things. The guy in charge of the fair said “it wasn’t meant to be him.” What? A black man in a suit holding a random “health bill” with what a presidential seal as a belt buckle and that’s not supposed to be Obama? Come on. Please don’t insult our intelligence. Please.

I don’t think anyone meant any harm here but it obviously goes waaaaaay over the line.

One snarky note because I can’t help myself – It really tells you something about Obama’s approval ratings that there were only two complaints after six weeks. Two?

Update: The church which was holding the fair said they had no idea of the game.