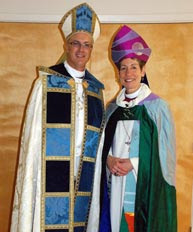 Episcopaleontology–The study of a strange and nearly extinct creature, Epipscopus Stupidius, in its native habitat.

While there are many reasons that Epipscopus Stupidius may soon be extinct, experts agree that the most serious threat to the species is foot-in-mouth disease.

Some recent incidents highlight the very real danger that the very colorful species now faces from the disease.

The first occurred in the pristine environment up in the great State of Alaska. At the appointment of a new Episcopal Bishop in Alaska the outgoing Bishop had some advice for the younger members of his species. He looked back on the great heritage that 2,000 years of Christianity offers, on the wisdom of great saints and sages to offer the best advice he could to his successor as to what makes a good bishop.

McKelvey suggested five practical traits of a good bishop. “Be a doubter … Cultivate a sense of patience … Learn to compromise … Journey out in faith … Be a risk taker.”

Ah yes. We all remember Jesus saying “Blessed are the doubters, for they will be unsure of what they believe and this is good because….ummm…it makes compromise easier. Blessed are the compromisers….”

Happily, the younger members of the species, with their bright feathers all puffed out, seemed unaffected by their very sickly elder.

But lest you think that this terrible disease is limited to the remote areas of the great frozen north, we have another horrible example a little closer to home this time ravaging Episcopus Stupidius Catholicus.

Cardinal Theodore McCarrick, the Catholic Archbishop emeritus of Washington, D.C. was speaking to a reporter about, well it speaks for itself…

CNSNews.com asked McCarrick, “Americans believe there is a God given right to the free exercise of religion, which is enshrined in the first amendment. Does a Muslim born and raised in Mecca have a God given right to convert to the Roman Catholic faith, in your mind, and freely exercise his religion there?”

“As an American, I believe that we all have a right to practice what God tells us is his message to us, and if, therefore, if someone is–if someone sees the Gospel as the truth of God’s presence in our world, that person should embrace the Gospel,” McCarrick responded.

Mind you, the question was whether a Muslim has a right to convert to Catholicism. The answer was PC milquetoast at its worst. So much for believing in the unique saving power of Christ. I know what the Archbishop was likely trying to say, if even in-artfully, by why would that be a response to a question about the natural right of all men to follow Christ?

He must have been recalling the saying of Jesus “Make disciples of all nations, unless those nations are kinda scary or you might be embarrassed. Then don’t worry about it so much…On second thought, forget about the whole discipleship thing. Blessed are the lukewarm…”

If you see signs that your Episcopus might be Stupidius or clear evidence of foot-in-mouth disease, check for bright colored vestments to be sure. If your fears are confirmed–move to Denver.