Lebron Has a Race Card? Really? 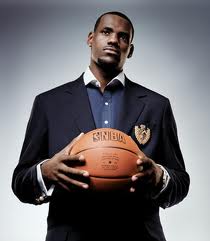 He’s a multi multi millionaire, soon likely to be a billionaire. He’s the most sought after man for endorsements in the world. He may be the best in the world at his profession and he’s respected and cheered by fans and peers alike. He is so well known that he can go by only his first name: LeBron.

And yup, LeBron just cried racism. That’s right. King James said that the backlash he’s gotten over his primetime announcement of which team he was going to play for was…uhm…racist.

LeBron and his marketing guy were on CNN with Soledad O’Brien. The transcript from Yardbarkers reads:

O’BRIEN (on camera): Do you think there’s a role that race plays in this.

JAMES: I think so at times. It’s always, you know, a race factor.

CARTER: It definitely played a role in some of the stuff coming out of the media, things that were written for sure.

Come on. Shouldn’t LeBron have had his race card revoked when he became…I don’t know…one of the most powerful men in the world?

I don’t think America gets the credit she deserves. Our President is Obama, our biggest television star is Oprah, our most famous athlete and most sought after advertising brand is LeBron. When can everything stop being about race? Our country isn’t perfect but it’s a heck of a lot better than it gets credit for being.

Can’t people just say that the whole “Which team will LeBron play for” saga was a little overplayed and call it a day. Criticism of LeBron is allowed and it has nothing to do with race.

I don’t much like Obama’s policies because he’s a pro-abortion socialist, I don’t watch Oprah because she’s a little new-agey for my taste (and I’m not a woman), and I’m going to root against Miami everytime they play the Knicks (even though the Knicks have like zero chance of winning). And guess what? It has nothing to do with race.

I don’t think that LeBron’s accusation of race is a valid indictment of this country, but I think the fact that someone as powerful as LeBron still sees himself as a victim is worrisome.