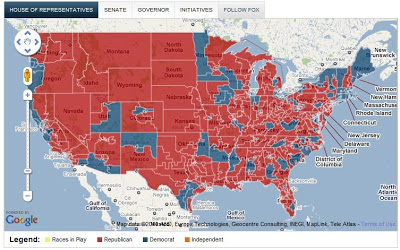 4:07 AM A Picture is worth a thousand words.

3:45 AM: CNN.com Headline “Split Decision” Hardly. That is some wishful thinking.

3:30 AM: Hard to know exactly what will happen in Alaska with write-in leading Miller 39-34%. Have to see how many of the write-ins will be counted for Murky. Might be a while before we know, but it doesn’t look good for Miller. –PA

1:54 AM: Lisa Murkowski’s write in campaign looks like it’s leading over Joe Miller in Alaska. Ack.

I’m going to bed. I think Patrick’s waking up soon. I don’t know if he’s going to write in this or start a new thread.

1:17 AM: Twitter was made for election night. All these little electoral tidbits just scrolling across my computer screen. Awesome.

12:50 AM: Michelle Malkin just tweeted that Ken Buck is beating Michael Bennet in Colorado’s Senate race. That’s some good news after the Harry Reid victory. That would bring it to six Senate seats won tonight by the GOP.

12:47 AM: Hilarious. The home page of Yahoo has pictures of Democrats Barbara Boxer and Joe Manchin with the headline “Dems retain control of Senate.” That’s the news tonight? Really? This is a great night for Republicans but Yahoo makes that their home page.

12:44 AM: Heartache. The Proposition in California to legalize marijuana failed. Frito-Lay hardest hit.

12:30 AM: Here’s the vid of Boehner’s speech tonight. I think it was awesome. This could be seen as Boehner’s first national address. It seems to me he’s the oppositte of Obama. He deflects the praise, he shows emotions, and no teleprompter. I especially liked that he thanked his eleven brothers and sisters. Check it out. Good stuff:

12:11 AM: Toomey wins. Awwwwyeaaaaaaah. Just a few years ago we had Snarlin’ Arlen Specter who jumped to the Democrat Party because of Toomey’s challenge. Then Sestak chased Specter out of politics altogether. So all in all we had Specter and replaced him with Toomey. I’ll take that trade any day of the week.

11:57 PM: Rudy Giuliani says we’re going to find out tomorrow whether Obama’s an ideologue or a pragmatist. Ooooh. Ooooooh. Let me answer. I know. I know the answer. I actually don’t think we’ll find out tomorrow. I think the upcoming battle about the Bush tax cuts will be the deciding factor as to how the remainder of Obama’s one term will go.

11:48: The Stupak seat goes to a pro-life Republican doctor named Benishek. Don’t know much about him other than he’s pro-life. But I love that Stupak’s seat flipped. (I still can’t say Stupak’s name without sneering.)

11:46 PM: Boehner getting choked up. Pretty moving. And I’m not one for men crying in public. I’ll look for video in the a.m.

11:36: Allen West wins. Awesome. I think we had this on the blog a while ago but here it is again because it’s awesome. “Give me that damn gavel.”

11:34: The Politico just called Pennsylvania for Toomey. I’m still not sure but I just like to hear it. Senator Toomey from Pennsylvania. He’s truly a pro-life conservative. I hope the Politico is right.

11:25 PM: Look at how rudely the MSNBC guys treat Michelle Bachmann who won tonight. Chris Matthews acts like a jerk. But Bachmann zings him but good by asking him how his leg tingle’s doing tonight. Check it out.

11:17 PM: John King of CNN just called tonight a “shellacking” in the House. (I probably spelled shellacking wrong but it’s late and I’m nervous as a long tailed cat in a room full of rocking chairs about Toomey who does look like he’s pulling slightly ahead. Very slightly. Expect lawsuits and recounts here in PA. (Oh and fraud. Lots of fraud.)

As I’m writing this Wolf Blitzer has Toomey up 36,000 votes which is just about one percent.

11:00 PM: How could a state elect Jerry Brown and Barbara Boxer? I know it’s California but those two are clearly crazy people. I mean clearly crazy. Think about it – You’ve got an electorate that makes its leaders Arnold Schwarzenegger, Nancy Pelosi, Barbara Boxer and Jerry Brown. That alone would make me move out of the state.

10:51 Kathleen Parker on CNN is going negative on the Tea Party: “The tea party’s been a little bit naive,” she said because they don’t understand there are other branches of government. What?! Did they never see Schoolhouse Rock?

10:49 PM: One thing. I’ve seen a lot of pundits talking about “Independents” breaking towards Republicans. I think the thing they’re missing is that many of these independents were conservatives who walked away from the GOP because of its liberal-ness.

10:43 PM: Toomey and Sestak tied. The good news is that Philly and Pittsburgh returns usually come in earlier than the rural areas so while early returns showed Sestak with a lead the longer the night goes on I suspect that as returns come in from rural areas Toomey may pull ahead.

The only thing that has me worried is how many voting machines will be pulled out of people’s trunks in Philly that happen to be full of Sestak votes.

10:34: Interesting that the GOP seems to be doing great in House races while perhaps underperforming in the Senate races. Methinks that has something to do with the crazy amounts of money in Senate races allowed the Dems to personalize the races and make it about the two people rather than issues which were prevalent in the House races.

10:24 Pro-life Catholic Anh “Joseph” Cao of Louisiana is down big right now. He’s in a hardcore blue district and got in on a special election so his re-elect was always a little iffy.

10:10 PM: Mike Kelly takes out Kathy Dahlkemper in Pennsylvania who you might remember was an alleged pro-life Republican who was one of the holdouts on Obamacare until flipping late to side with Obama. Any of those who get kicked out of D.C. makes me happy.

9:51 PM: I’m as sooooo psyched that Nancy Pelosi is no longer Majority Leader. Kick her out of the office. I wanna’ send the guy who played Lumbergh from Office Space and go in and tell Nancy, “We’re gonna need to go ahead and move you downstairs into storage B. We have some new people coming in, and we need all the space we can get. So if you could just go ahead and pack up your stuff and move it down there, that would be terrific, OK? “

That would be awesome.

9:34 PM: Former Philadelphia Eagle and University of Michigan grad looks like he’s going to win his congressional seat in Jersey. My sister knew him in Michigan and she speaks very highly of him.

9:30 PM Marco Rubio delivering his victory speech. He’s got four young kids. Super cute. The family together looks like a Sears Catalogue pic. Oh wait, with four kids it would have to be some Catholic magazine. Glad to see Charlie Crist go down in flames. That guy had no principles whatsoever and changed from pro-life to pro-choice without blinking an eye.

Remember when Rubio was a long shot and the GOP establishment was getting behind Crist in the primary? Thank goodness that didn’t last. His candidacy was really the state of all this where conservatives took back the Republican Party.

Rubio’s giving a great speech about being the “Son of exiles” from Cuba. He’s talking about “America’s greatness.” Don’t hear much about that from Obama, do you?

9:12 Fox is projecting that the GOP will take over the House. Palin calls it “an earthquake.” Fox is saying the Republicans will take 60 seats or more. I’ve gotta’ say Palin looks really really comfortable in front of the camera. I mean really comfortable. Good to see.

She says “We’re gonna’ give the Republicans another shot.” God help them if they stray from their ideals.

9:04 PM: Tea Partier and pro-lifer Rand Paul wins. About to take the stage. No mention of Aqua Buddha. (He’s a terrible speaker. I mean it’s painful.)

8:49 PM: Connecticut goes for Blumenthal over McMahon. How could a state vote for a guy who lied about being a Vietnam vet. Doesn’t that exclude you from polite company. I guess the Senate isn’t polite company.

8:40: Grayson loses. Nobody deserves it more. Guy’s a lunatic.

8:38 PM: West Virginia Senate Race looks like it’s going to Joe Manchin. No great surprise there but the thing is that if Manchin lost it would’ve signaled a tidal wave and possibly a change of leadership in the Senate. So looks like the Senate changeover isn’t going to happen.

8:01 PM NBC calls for Rubio in FL and Coons over O’Donnell in Delaware.

7:36 PM ET Rand Paul and Dan Coates win,, as expected. WV is closing now. That is an interesting one. –PA