Don’t Believe the Hype of a GOP Sweep 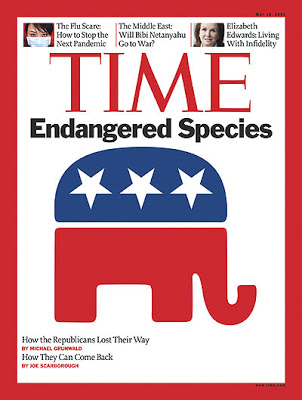 Don’t trust those predicting a GOP sweep. Here’s the thing, nobody knows anything. Just two years ago all the prognosticators foresaw a new era of progressivism with the GOP being banished to the hinterlands. Let’s walk down Memory Lane and check out all the doomsday predictions made in 2008 for the GOP. They did everything but carve the tombstone.

“This was not just a change election, but a sea-change election,” Robert Borosage, co-director of the Campaign for America’s Future, said during remarks at the National Press Club. “This is the end of the conservative era.”

“What you’re seeing in the nation is the emergence of a center-left majority,” Borosage continued. “We are witnessing the creation of a permanent progressive majority.”

In this week’s Wall Street Journal poll, President Obama’s favorability rating is at an all-time high, while the GOP’s rating is near its all-time low. Private polling suggests that margin is even wider among independents.

If that trend continues, the Loyal Opposition won’t just be marginalized; it’ll be isolated.And from a political failure of that magnitude, Republicans won’t soon recover.

What is next for the Republican Party after its historic whipping Tuesday? Try four years of denial.

Venerable conservative pundits and talk show hosts who have dominated the airwaves and op-ed pages of the Great Republic for the past three decades can continue to lament the departure of Ronald Reagan the way the ancient Egyptians once mourned for Osiris or the ancient Greeks the passing of the great god Pan, but he ain’t coming back.

All the talk about so-called strategies for the future among Republicans has focused on “getting back to the essentials” that have defined conservative politics in the Republican Party for the past generation — low taxes, free trade, minimum government, low interest rates and happily running up astronomical budget and international trade deficits on the assumption that there would never be a day of reckoning. But between the great Wall Street meltdown and President-elect Barack Obama’s decisive national victory, it came.

Republican conservatives are fond of arguing that Obama is doomed to fail and that when he does, the American public will eagerly embrace the GOP in relief as it pitches its traditional message once again.

But this is a passive and even fantasy-world approach to political strategy. Obama and an awful lot of well-educated, ambitious and experienced people around him do not intend to fail. If they can stabilize the U.S. economy, significantly reduce the annual government budget deficits that George W. Bush ran up and bring down the potentially catastrophic annual trade deficits, the Dems could be running the country for many elections to come.

So don’t believe the prognosticators. Please get out and vote because it doesn’t matter what they say is going to happen. You have to make it happen.