Archbishop Of Canterbury Abducted By Aliens 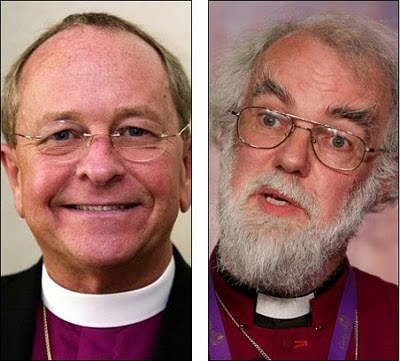 The Archbishop of Canterbury has been ‘abducted by aliens.’ At least according to the gay Gene.

The Archbishop of Canterbury has been accused of being ‘abducted by aliens’ over the issue of homosexual clergy.

The Bishop of New Hampshire said: ‘I pray for him every day.

‘I have clergy friends who literally studied at Archbishop Williams’ feet and who have said to me it is almost as if aliens have come and taken Rowan away from us.

‘They have left something that looks like him but we don’t recognise him any more.’

Bishop Robinson who is openly gay and whose sexuality caused controversy when he was elected in 2003, told the Times that Dr Williams is a wonderful human being and a faithful Christian.

But he added:’ I’m not at all sure that his attempts to hold us together as a communion at all costs is the kind of leadership that this time calls for.’

The gay Gene actually has a point, that Dr. Williams “attempts to hold us together as a communion at all costs” are responsible for the breakup of the Communion. Of course, the gay Gene sees it differently. He thinks Dr. Williams should have thrown all the gay bigots and misogynists out a long time ago and let the gay Gene and the kaleidoscopic Jefforts-Schori be the model for the new Church they were building.