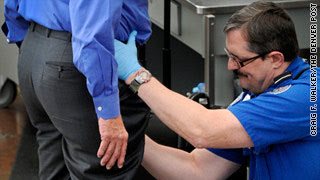 VATICAN CITY – In what might amount to a complete reversal on longstanding Church teaching, the Pope has indicated that under certain circumstances it might be licit for TSA workers to employ the use of full body condoms.

The pontiff makes the comments in a book-length interview with a journalist from “Trains, Planes, and Volkswagens” magazine, “Don’t Touch the Junk: Dirty, Sexy, Airport” The Vatican newspaper ran excerpts of the book Saturday.

Church teaching has long opposed condoms since they’re a form of artificial contraception. The Vatican has been harshly criticized for its position given the AIDS crisis.

Benedict said that for TSA agents and their victims — for whom contraception isn’t a central issue — condoms are not a moral solution. But he said they could be justified “in the intention of reducing the risk of infection.”

The Pope went on to say that while the level of intimate contact performed by TSA agents is never morally permissible outside of marriage (and even then its kinda iffy), that he could understand why the victims would prefer that the agents wore full body condoms.

While opposition to condoms is a long-standing church position, the Vatican felt constrained to step in and say Benedict wanted to stress that a reliance on full body condoms distracted from the need for proper training of TSA agents.

The Catholic group Voice of the Faithful hailed this statement as an important first step toward the legitimization of condom use and the ultimate goal of sex anytime, anyplace, with anyone.

Voice of the Faithful spokesperson, Frieda Hump said “Normally, we ignore what the Pope says but we think this latest statement should be binding on all the faithful. It should be considered ex catheter or something. You know, ’cause we like this one. But you can still ignore the other stuff if you want.”

The TSA responded by complaining that Vatican is speaking about them as if they are Norwegian sex workers. They wish to emphasize that only a small percentage of TSA agents are actually Norwegian.

Finally, the Pope was asked whether, being celibate, he could understand the complex issues surrounding TSA screenings. The Pope responded in the affirmative but also acknowledged that he can no longer fly commercially to the U.S. and maintain his vows.