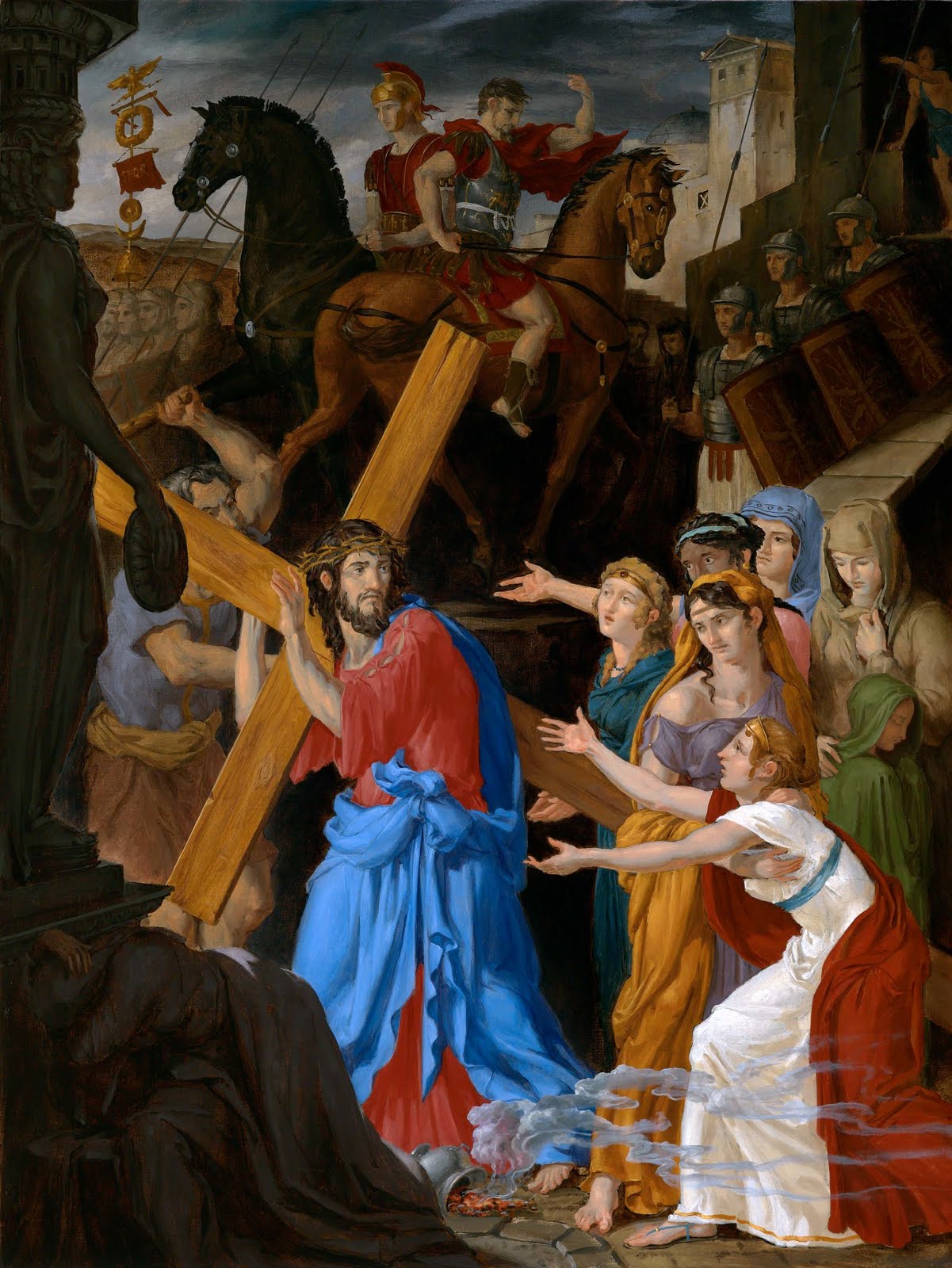 New meditations based on the set of the Stations of the Cross recently completed by New York painter Leonard Porter.

Station 8 shows Christ meeting the women of Jerusalem and giving them the difficult words “Do not weep for me, but weep for yourselves and your children,” alluding the coming destruction of the Temple and indeed of Jerusalem itself. An overturned brazier at Christ’s feet speak of the Temple’s destruction, the end of shadowy worship of the Old Testament and the birthing pains of a new daughter, the Church, who sings right praise.

Porter’s painting shows the increased chaos of sin entering the walk of the via crucis. The setting is outside the city walls, progressing ever closer to the hill of Calvary. Roman soldiers file out of the city, bringing all earthly power against Christ, carrying the Roman standard of military power. Soldiers seem to rain down on Christ, just as the clouds darken and the wind picks up and begins to blow the centurion’s cloak. The centurions on horseback clearly show their respective understanding of the event. In the gold helmet, Longinus ponders Christ’s death and travels with him. The other centurion bares his arm in a display of earthly power, turning his horse away from Christ.

Porter intentionally gives the scene a simultaneous calm and frenzy made possible in classical painting. Though the figures are in deep mourning, their poses are carefully and beautifully composed. Though Christ suffers, his divinity remains evident.

The daughters of Jerusalem come from many races and social classes, with arms reaching out to Christ inspired by David’s Brutus. In common biblical symbolism, women, like the woman at the well or the Virgin Mary, represent the Church, and here they are clustered like an edifice of great strength. Like Christ, they glow with vibrant Easter colors, while the rest of the scene is pulled back in darkness by Porter’s addition of smoky glazes over the paint.

On the extreme right, a woman almost invisible in deep shadow weeps at the destruction of Jerusalem at the foot of a statue figure known as a caryatid, another woman-figure emblem of the Church. This example, based on an original from Hadrian’s Villa, wears a castle on her head. The image of a woman with a castle on her head is a long standing image of a city, or polis. The Church is therefore represented as a person – a woman as pillar of the Church – yet simultaneously as a city, pouring out a libation bowl in her right hand, just as the Church will dispenses divine life in the sacraments after the destruction of the Temple.