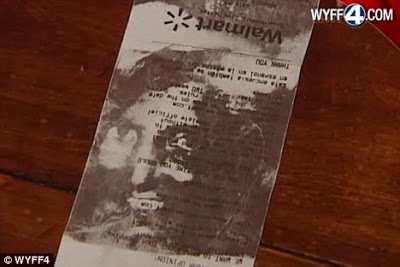 A couple believes that Jesus appeared on their Wal-Mart receipt. Hey, I know there’s a lot of saving at Wal-Mart but I didn’t know they meant this.

Thank you. I’ll be here all week.

A South Carolina couple claims they received a divine message last week after a shopping trip to Walmart – when a shadowy image of Jesus appeared on their receipt.

Jacob Simmons and his fiancée, Gentry Lee Sutherland, of Anderson County, said they bought pictures from the discount retailer on July 12.

After attending a church service three days later, Mr Simmons noticed the receipt had darkened to reveal two eyes, a nose and a bearded face he says is an image of the Messiah.

I’ve gotta’ tell you, if I got this receipt I’d be a little worried and wondering why Charles Manson was appearing on my Wal-Mart receipt.