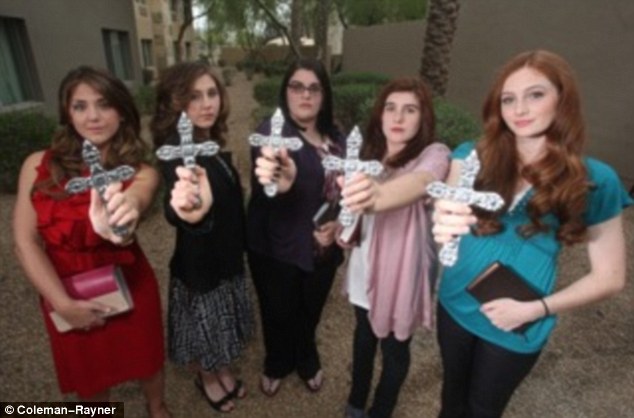 This seems like a great idea for a show on the CW but maybe not so much for reality.

The five teenage girls might look like they’re in a normal class, eagerly reading their textbooks and answering their teacher’s questions diligently.

But the textbooks are Bibles and the girls all have crosses instead of protractors, as they train to become exorcists – real exorcists who fight demons, curses and evil spells.

‘People do look a bit surprised when I arrive,’ admits graduate exorcist Brynne Larson. ‘When people call for an exorcist, they don’t picture a 16-year-old high school girl.’…

We have found that our female, teenage exorcists are particularly effective at curing the possessed,’ says Rev Larson, whose daughter Brynne is a supernaturally talented exorcist.

Highly experienced in casting out demons, saving souls, and banishing evil spirits to hell, she is also a student who enjoys styling her hair, shopping and meeting her friends at Starbucks.

First, let’s hit the mall and then we’ll do a little exorcising? Cool! Lol!