Why Are Liberal Protesters Always Naked? 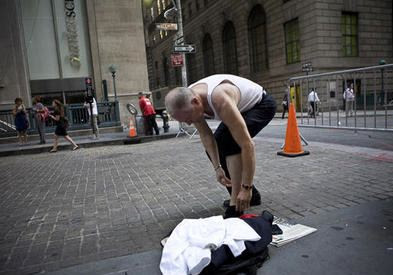 Naked chicks and dead animals? What’s the big deal? You can get that on the Discovery Channel. First you watch animals ripping apart smaller animals and then invariably the commercials feature half naked women selling me something that you can’t remember once the animals start tearing each other apart again.

And it’s not just PETA. Seriously, the to-do list for liberal protesters must start with 1) Get naked! 2)???

Remember this one from a few weeks ago? The Blaze reported that a “group of 50 artists and supporters angry with Wall Street descended lower Manhattan this morning dressed as bankers only to quickly strip down and then disappear within minutes.”

This did nothing for the cause other than to make everyone wary of artists and supporters.

What is it with lib protesters getting naked? What’s that about?

I believe it has everything to do with libs knowing their ideas are unmarketable to the majority of people so they know they must do something else. They know that instead of appealing to logic they must go the other way and appeal to the basest instincts possible.

And let’s face it, they know the juvenile media will all but show up waving single dollar bills. (I once heard a radio report live from a naked protest and I couldn’t help but wonder how the reporter sold his editor on going to that protest? It was radio for goodness sake!)

If Tea Partiers send a media advisory in hopes of getting coverage they know that even if they promise 3,000 protesters the media isn’t likely to show up. But the libs know that you don’t need 3,000 protesters you just need two or three naked models. And then the press will gather like vultures over road kill.

It’s a sad commentary on our culture but in these days when its argued that sex is meaningless it’s ironically become the central focus of our culture.