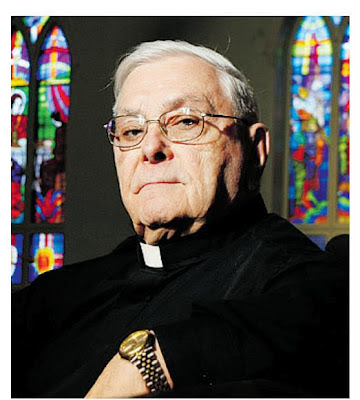 Here’s a great story about an 80 year old Catholic man who was a great husband but always felt he had a calling to the priesthood. And when they were elderly and his wife fell sick, she encouraged him to become priest after she died. So he did.

So, in the end, he listened to God and his wife in one fell swoop. That’s pretty good.

The Ottowa Citizen has the story:
For nearly half a century, Gérard Lafrenière was devoted to his wife, and, by all accounts, fulfilled his vows to love, honour and cherish her. Yet, he had another love, too.

In 2009, two years after his wife of 49 years, Gisèle Viau, died, Lafrenière fulfilled the vocation that had been with him since childhood. He became a Catholic priest, with his wife’s blessing.

“This is something that has been in my life for the past 65 years,” he told the Citizen on the day of his ordination. “You never know what the Lord has in store for you. I had to put it aside for a while and take a different avenue.”

On Saturday, three years after becoming a priest, Father Lafrenière’s died at the age of 83.

Those who knew him describe him as a modest but exceptional man who had a great gift for consoling others.

“He was very loved,” said his son Georges Lafrenière.

“He was the type of person who was always willing to listen to you, really listen,” said Leonard Larabie, a longtime member of the congregation of St. Joseph d’Orléans, who knew Lafrenière for nearly four decades. “He knew how to listen and how to comfort people.”

“He was a man with a very deep faith,” said Royal Galipeau, the Conservative MP for Ottawa-Orléans, who remembers Lafrenière signing his nomination papers when he entered politics in the 1980s.

“He didn’t care about promoting himself. He just fit himself in where he thought he was best needed.”

Even though Lafrenière officially retired in November when a liver ailment left him frail and shaky, he continued, unofficially, to used what energy he had left to take calls from the church and members of the congregation.

“He really worked until the end,” said his son Georges. “He was doing a lot of phoning from his bed.”

That, say friends, was typical. “He never retired,” said Larabie. “He was too busy. He just never slowed down.”

Even so, it took Lafrenière a long time to get to where he wanted to be. He grew up on a farm near Plaisance, Que., one of several children. He knew as a boy of nine or 10 that he had a vocation, he want to be a priest. When he was 14 he began studies at the Ottawa junior seminary, but left after less than three years because of poor health. He assumed he’d never be a priest.

Lafrenière eventually married, had children and embarked on a career in the insurance business. His faith, however, never dimmed. He kept the church at the centre of his life, serving as a deacon at the Parish of St. Joseph d’Orléans for almost 30 years.

His wife, Gisèle Viau, shared his faith, according to friends. And shortly before she died in August 2007, she urged him to fulfil his vocation.