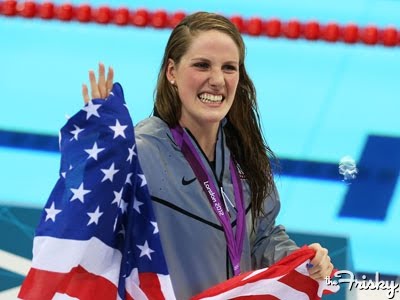 America’s sweetheart, incredible athlete, and Olympic Gold medalist are all ways to accurately describe Missy Franklin. There might be one more way to describe her soon.

The young Miss Franklin, who attends a Catholic high school, is considering converting from Protestantism to Catholicism. Via Catholic Review ht BigPulpit.com

At home, she and her parents, Richard and D.A. Franklin, “don’t talk about swimming, but enjoy just being together,” she said. The Franklin household includes Ruger, an 8-year-old Alaskan Malamute.

“We support each other and enjoy great family moments such as cuddling on the couch, in front of the fire, watching ‘The Sound of Music,’“ she told the Register. “I have the best support system in the world.”

Franklin is not a Catholic, but she said life as a student at a Jesuit-run high school has her considering joining the church.

“My experiences at Regis Jesuit have absolutely impacted my spiritual life, in so many ways. I am considering converting to Catholicism; I’m currently Protestant,” she said.

“Going into Regis Jesuit, my faith was not a very big aspect of my life. Taking my first theology classes, going to my first Masses, going on my first retreats, I began to realize how important God is in my life and how much I love him and need him,” she continued.

Franklin said her relationship with God grew so much in her first three years at the school. “I am very happy with where I am with him right now, although there is a lot of more work to do,” she added.

Her junior year really affected her. “I have had two of the best experiences of my life,” she said, referring to the annual Kairos retreat for juniors she attended and her participation in a two-week service project.

“Both of these changed my life,” Franklin said. “I am so thankful for Regis Jesuit, for they have brought God and so much meaning into my life.”