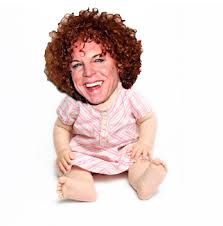 You had to know this was coming. The newest awesomeness from the 21st century is the Fame Daddy sperm bank. That’s right, you’ll get sperm from a celebrity of athlete for 15,000 pounds. Who knows how much that is in real money but it sounds like a lot.

Something tells me you won’t get a lot of George Clooney and David Beckham babies out of this new celebrity sperm bank. I’d bet you’ll get sperm from the likes of Fisher Stevens and Joy Behar.

The weird thing is that I’m pretty sure you don’t have to pay celebrities and athletes to impregnate women and leave them. I’m pretty sure they do that for free all the time.

Fame Daddy will offer would-be-mothers “top quality celebrity surrogate fathers” when it launches next February, according to Dan Richards, its chief executive.

Prices will start at £15,000 for a premium sperm service from the clinic.

The company’s website, which launched last week, claims that women can pick from a range of celebrated high-achievers when picking a prospective father for their offspring. The identities of each high-flying father will kept secret as the donors have been guaranteed anonymity. The men will also be required to sign a legal waiver of their rights to access to the child.

However would-be mothers using the Fame Daddy clinic will be able to identify their area of achievement and other personal attributes.

They can choose from donor dads who have excelled in a range of fields including sport, entertainment and business. The website lists a range of “sample profiles” of typical sperm donors, including an Oscar-winning actor, a member of the House of Lords and an ex-Premiership footballer.