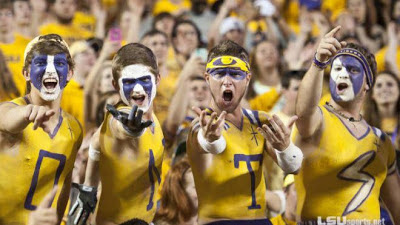 A group of Louisiana State University football fans whose admiration for the Tigers is second only to their love for Jesus is outraged after the school digitally erased the tiny crosses they painted on their bare upper chests at a recent football game.

LSU officials sent out a photo of The Painted Posse, Christian students who paint their bodies with LSU school colors and small crosses for home games, in an email about the LSU game against South Carolina on Oct. 13. The students were shocked to see the photo, which appeared to be otherwise untouched, in the newsletter that went out following the Tigers’ 23-21 win over the then-No. 3 Gamecocks. The Tigers are now 7-1 for the season.