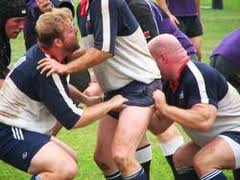 Ground has been broken in the heart of Philadelphia’s Gayborhood for a housing project that will serve the needs of the LGBT community.

It’s described as the first urban project of its kind — six floors of low income housing for elderly lesbians, gays, bisexuals and transgenders.

It’s being built with a mixture of local, state and federal funds. And that was reflected by the number of politicians on hand for Friday’s ceremony.

Mayor Michael Nutter was joined by his predecessors, John Street and Ed Rendell.

“Once completed, this project will provide 56 units of affordable housing to people 62 years and older. The facility will be energy efficient, generating more than five percent of the total energy that it uses from within the building,” Nutter explained

So it’s got me wondering if straight people are allowed to live there. If they’re not, isn’t that a bit discriminatory?

And exactly how gay do you have to be to be able to move into housing like this? What if you just had a few weird dreams after watching Fight Club? Does that count? What if you were just a little “curious” in the 70’s like David Bowie?

Do you have to prove your gayness? How? Is there like a room set aside by the landlord for you to prove it?

And what if you’re not actively living the gay lifestyle? Is there some kind of minimum amount of partners per year? Per week?

You don’t think this stuff will come up? It will. There’s a long list of folks trying to get into government subsidized housing, especially now. So now gay people move to the front of the line? Does that seem fair?

Welcome to America in the 21st century folks.