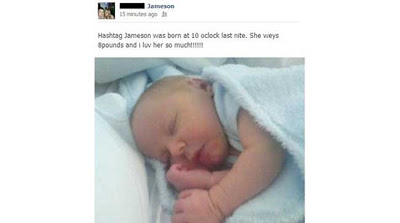 Whatever happened to naming your babies after saints? But never mind that, please don’t name your kid after a popular trend that’s going to need an explanation in a decade.

According to news reports, a British mom has named her baby hashtag. As in #. That’s like a parent in the 80’s naming their kids Betamax.

A mother has christened her baby girl Hashtag Jameson. However, instead of taking to Twitter, which spawned the now ubiquitous preface, the mother posted the announcement on Facebook, compounding her apparent #fail, the Daily Mail reported.