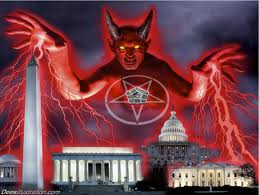 Satanists and religious liberty advocates…together at last. Warm and fuzzies yet?

On January 25, the members of the Satanic Temple will gather on the steps of Scott’s office in Tallahassee as a show of solidarity with the Governor, whom they believe “has shown unwavering fortitude and progressive resolve in his defense of religious liberty,” according to a press release.

Specifically, they’re referring to Scott’s recent approval of Senate Bill 98 that permits school districts to allow students to read inspirational messages of their choosing at assemblies and sporting events. It went into effect on July 12.

“The Satanic Temple embraces the free expression of religion, and Satanists are happy to show their support of Rick Scott who — particularly with SB 98 — has reaffirmed our American freedom to practice our faith openly, allowing our Satanic children the freedom to pray in school,” the release continues.

They’re talking about holding a rally and everything.

Something tells me that Rick Scott’s probably thrilled with this. Hey, Republicans will take any support they can get right now. Sure they’ve lost the African-American vote, the Hispanic vote and the Catholic vote but they’ve cornered the market on the all important Satanist voting bloc.

Kinda’ sad that Catholics voted for Obama and Satanists are rallying for prayer in school. What’s going on with the world? This has got to be a sign of the apocalypse or something, right? Maybe the Mayans were just a month or two off.