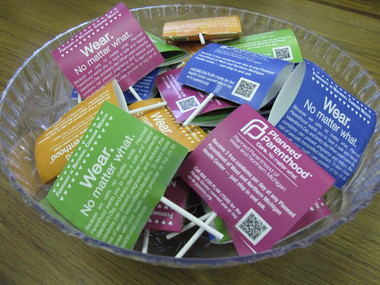 Hey remember when Joe Camel was declared evil because he appealed to children to try something that was dangerous for them. But it’s perfectly awesome for Planned Parenthood to entice young people to have sex with lollipops.

Hey, before this the only people to correlate candy with child sex were driving around schoolyards in unmarked vans. But now we have a federally funded private organization doing it. Ah, progress.

McKeiver said the campaign encourages sexually active individuals to talk to their partners about using condoms to protect against unintended pregnancies, HIV/AIDS and other sexually transmitted illnesses.

Each condom pop consists of two condoms, a lollipop and information about safe sex adorned with the slogan, “Wear. No matter what.” This does nothing less than encourage children to have sex. And we’re paying for it.