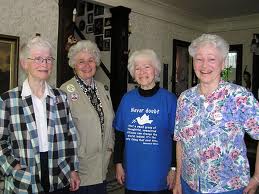 I noticed something odd (or maybe not so odd) in the anti-Catholic rants in the media recently. While they talk about things like the “stained glass ceiling” to refer to the fact that women can’t become priests they use images of nuns that don’t exactly correlate with their message.

60 Minutes used a graphic of a habited nun in their story blasting the Church for misogyny. And just yesterday, NBC’s The Today show extensively used footage of the Sisters of Mary from Ann Arbor in connection with an argument for women becoming priests from Joan Chittister.

I understand why they’re doing this. Obviously they are having a problem finding Sisters who look like Sisters so they’re borrowing the images of faithful Catholic nuns in order to advance their agenda. Their argument wouldn’t be as effective with images like these, would it?