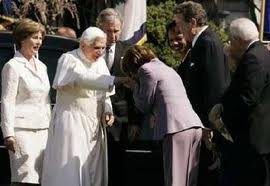 No surprise here. But worth noting. Vice President Joe Biden refused to kiss the Pope’s ring, according to Yahoo News.

I can’t help but not be surprised at this decision of Biden as he likely sees Catholicism as having no greater authority than Pope Joe himself.

If he doesn’t submit himself to the Church’s teachings on such things as the taking of human life or the institution of marriage why would he submit to kissing the pope’s ring?

Come on Joe, even Nancy Pelosi kissed the pope’s ring. And she didn’t even burst into flames or nothing.

Joe Biden doesn’t kiss up to anyone — whether a queen or a pope.

The vice president told a gathering of Irish-Americans in New York City on Thursday that as a young U.S. senator he was to meet the queen of England.

He remembers getting a call from his mother, who told him not to kiss the queen’s ring.

Years later, when he was to meet Pope John Paul II, Biden says his mother told him not to kiss the pope’s ring.

Biden, a Roman Catholic descended from struggling Irish immigrants, says his dad said it was “all about dignity.”

Biden says his mother told him that no one is “better” than him. And while Biden should treat everyone with respect, his mother said her son should also “demand respect.'”

To be clear, kissing the pope’s ring is not a recognition that he’s better than you. Looks like Joe is bringing a few of his own issues to the table. The thing that bugs me is not that he didn’t kiss the ring, it’s that he bragged about it.

It’s a little bit ironic don’t you think, that Mr. Demand Respect is in the most subservient position in the world as the vice president of the United States.