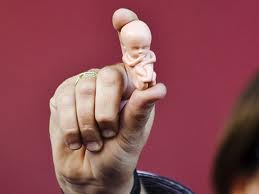 Three judges ruled that a public school acted constitutionally by prohibiting a student group from handing out two inch fetus dolls with pro-life messages attached, according to The Daily Caller.

Why? Because the last time they did it, students tossed the fetus dolls in the toilet, set them ablaze, and ripped their heads off and threw them at people.

So because some react crazily to scientific fact, exhibiting that scientific fact becomes ok to prohibit? That’s the state of public schools today? If enough children react poorly to a scientific fact, we’ll all ignore that fact because otherwise the children get rowdy until they calm down for the Planned Parenthood assembly.

The school, of course, has the right to prohibit students from bringing things in but it’s quite telling that as The Daily Caller points out this same group brought in many things before and the school was fine with it. It was the fetus dolls that caused the students to act out. The school should be consistent.

But I think the important thing here is to notice the violent reaction these students had to truth. Thank goodness they’re in a public school where they’ll be shielded from it.

If these children had a similar reaction to a picture of Martin Luther King Jr., do you think the school would prohibit his image from being handed out? Of course not. There’d be an assembly called with gleeful guidance counselors speechifying about tolerance and there’d be sensitivity trainers being paid by the hour to roam the halls taking notes. For goodness sakes, the school would probably be renamed after Martin Luther King Jr.

But babies? No. They’ve got to go.