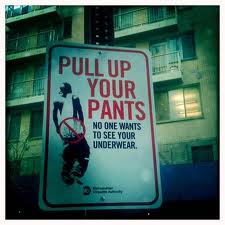 I take my kids down the shore to Jersey a few times over the summer. And that’s how you have to say it. “Down the shore.” Don’t know why. I’m a New York transplant. But we never go to the town of Wildwood. Ever. That town has become like Spring break for stupid people. Stupid people who are drunk.

Honest to goodness I drove through the town one late night last year and it was like a post-apocalyptic nightmare. Inebriated kids lying on the sidewalk hurling up their lunch, muscled up college kids fighting in the street, half-dressed girls screaming and crying into their cell phones.

It was depressing. I know families go there during the day for the amusement park on the beach but everyone knows that when the sun goes down you pack up and scramble back towards civilization.

But I heard this story on the radio and it seems I guess that enough families are avoiding Wildwood that the town’s mayor is attempting to clean things up a bit. I’m not sure this is how you do it but it’s kind of funny anyway.

City officials are preparing to vote on an ordinance that requires pedestrians walking on the beach to wear shoes and keep their pants on their waist. That’s right, droopy drawers will be illegal. And the proposed ordinance states that pants cannot be worn lower than three inches below the waist.

“I’m sick of hearing people complain about the disrespectful individuals who walk around with their butts hanging out,” Wildwood Mayor Ernie Troiano Jr. told the Press of Atlantic City.

Good for him. Now if he would only do something about allowing rampant public drunkenness of minors, cursing, fights, and random nudity it might be a place people want to visit.

I don’t know how Governor Chris Christie feels about this proposed ordinance but I’m sure he’s never in danger of wearing his pants too low. If that guy pulled his pants higher he’d have to talk out his zipper.