Wait. Lucky the Leprachaun is Gay? 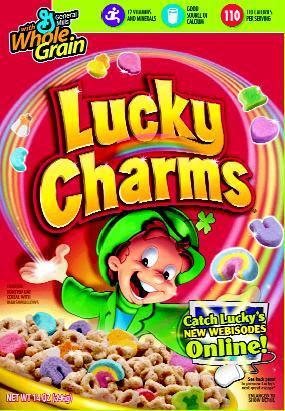 Lucky the Leprechaun from Lucky Charms has gone gay. Who could’ve seen that coming?

OK. I’ll admit. That picture should’ve made us at least question it before, huh?

Lucky Charms won’t just be at the end of the rainbow anymore. It’ll be right up in front, toeing the line for gay activists and their agenda.

According to The Huffington Post, General Mills just announced that Lucky Charms – with little rainbow marshmallows – will be the face for a new gay pride campaign, called #LuckyToBe.

“General Mills has come out in support of the gay community for Pride,” wrote HuffPo’s Christopher Rudolph, “and what better way to show their love than with the Lucky Charms marshmallow rainbow?”

The new gay-agenda campaign “encourages people with Pride to tweet and post online their reasons for why they’re prideful using the hashtag #LuckyToBe.”

In fact, General Mills sent a press release to GLAAD (Gay and Lesbian Alliance Against Defamation), which made it pretty clear that GM is jumping on the gay bandwagon wholeheartedly. “We’re celebrating Pride month with whimsical delight, magical charms, and two new rainbow marshmallows,” said the #LuckyToBe campaign. “If you’re lucky enough to be different, we’re celebrating you.”

Just so parents know. If your kid is eating Lucky Charms, those marshmallows are totally gay.