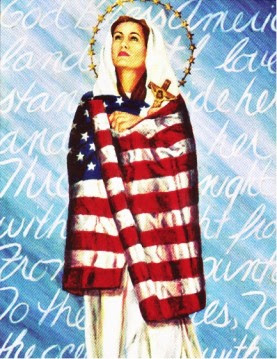 The Tablet, the newspaper of the Diocese of Brooklyn, ran this picture alongside a story about the Fortnight for Freedom. The caption reads, “This poster depicting the Blessed Mother draped in the American flag has been distributed to all parishes in Brooklyn and Queens as part of the observance of the Fortnight for Freedom campaign launched by the U.S. Catholic Bishops. The bishops are combatting threats to religious freedom in America.”

David Gibson of Religion News called it the Star Spangled Virgin. He asked if it was “blessed or blasphemous.”

I understand that we’re talking about freedom here and it’s not party politics so… No. I’m trying to talk myself into not being queasy over this but it’s not working. It’s disturbing to me.

And I’m not a guy who shies away from saying “God bless America” but that’s a whole different thing than wrapping Mary in the flag. Just no. No. No. No.

It seems that the artist is a woman named JoAnne Von Zwehl who’s done other paintings that give me the heebie jeebies as well. Like this one:

I’m sure the artist means well and loves Christ and loves America but if that confusing image doesn’t ignite some sort of gag reflex I don’t know what would.