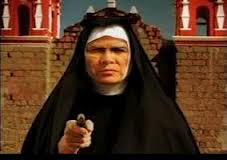 Many men would think it’s a dream to attend a meeting with 900 women. This is not that. This is the opposite of that.

Archbishop J. Peter Sartain will be attending the annual gathering of the Leardership Conference of Women Religious next week.

Mercy Sr. Theresa Kane, told NCR Online that Sartain’s presence was “a cloud over our head.” That sounds hopeful. This is like sending George W. Bush to an Occupy Detroit rally.

Just so you’re assured that the sisters are going into this with the right attitude, NCR reports:

The prioress of the Dominican Sisters of Peace, Sr. Margaret Ormond, said that to prepare for the gathering, she has met with sisters in her order, asking: “What do we want Archbishop Sartain to hear?'”

That sounds like they’re ready for a dialogue, right?

Abp. Sartain better grow new ears because he’s going to be hearing it.

I think this calls for a game of “I’d rather…” For those of you who don’t know how to play, you simply recite things you’d rather do than be Abp. Sartain showing up at this LCWR meeting. I’ll start.