Pew: There’s More Christians than Ever Before 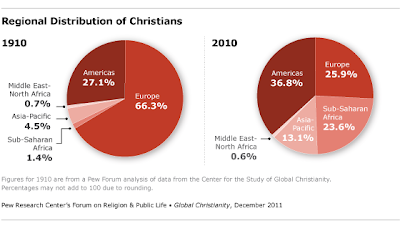 Pew says there are more Christians than there ever were before. Now, of course, these numbers are good for baseline information it also leaves a lot out.

On the one hand, there’s an awful lot of self identified Christians that aren’t very Christiany at all. On the other hand, Pew is forced to rely somewhat on government figures in places like China which are unreliable at best.

A comprehensive demographic study of more than 200 countries finds that there are 2.18 billion Christians of all ages around the world, representing nearly a third of the estimated 2010 global population of 6.9 billion. Christians are also geographically widespread – so far-flung, in fact, that no single continent or region can indisputably claim to be the center of global Christianity.

A century ago, this was not the case. In 1910, about two-thirds of the world’s Christians lived in Europe, where the bulk of Christians had been for a millennium, according to historical estimates by the Center for the Study of Global Christianity.2 Today, only about a quarter of all Christians live in Europe (26%). A plurality – more than a third – now are in the Americas (37%). About one in every four Christians lives in sub-Saharan Africa (24%), and about one-in-eight is found in Asia and the Pacific (13%).

I think this graphic they ran was interesting.

As we knew, Europe is in desperate need of re-evangelization. I fear that only a self induced calamity will wake them. And that’s bad news. But the gospel is reaching corners of the globe that haven’t heard it before. So that’s good news about the good news.