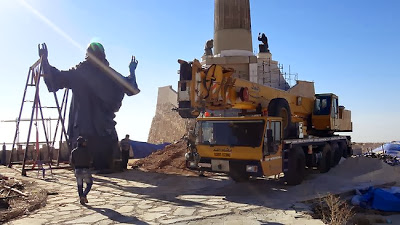 In the midst of a conflict rife with sectarianism, a giant bronze statue of Jesus has gone up on a Syrian mountain, apparently under cover of a truce among three factions in the country’s civil war.

Jesus stands, arms outstretched, on the Cherubim mountain, overlooking a route pilgrims took from Constantinople to Jerusalem in ancient times. The statue is 12.3 meters (40 feet) tall and stands on a base that brings its height to 32 meters (105 feet), organizers of the project estimate.

That the statue made it to Syria and went up without incident on Oct. 14 is remarkable. The project took eight years and was set back by the civil war that followed the March 2011 uprising against President Bashar Assad.