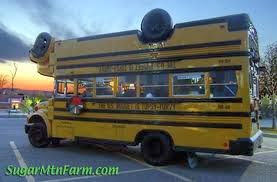 A school bus driver, who also happens to be a pastor, lost his job for praying with the children on the bus.

The world is officially upside down.

George Nathaniel, 49, is the pastor of both the Elite Church of the First Born and Grace Missionary Baptist Church in Minneapolis. He has worked for the Burnsville-Eagan-Savage School District for the past two years, and was hired by Durham School Services, which provides the drivers for the district.

As Nathaniel is a Christian, he says that he likes to give the opportunity for students to sing and pray to start off their day on a positive note.

Oh my somebody stop him. He sings and prays with the kids.

In other news, KITV4 News has learned that a bus driver who’s admitted to reading a newspaper while driving a city bus WON’T LOSE HIS JOB.

Fix News reports that a New York bus driver who was fired after failing a random drug test should be reinstated, the state’s highest court ruled on Tuesday.