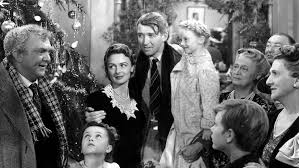 Are things really desperate in Hollywood? Can’t they just come up with any new ideas?

First they went ahead and made a sequel to “A Christmas Story” and now they’re looking to make a sequel to “It’s a Wonderful Life.” And it gets worse from there.

The girl who played “Zuzu” is now playing the angel and she’ll be coming to the aid of George Bailey’s grandson. Oh no. They might as well just add Jar Jar Binks and get it over with.

The sequel, titled “It’s a Wonderful Life: The Rest of the Story,” is being financed by Allen J. Schwalb of Star Partners who will also produce along with Bob Farnsworth of Hummingbird. The duo are aiming to get the movie into theaters for the 2015 holiday season.

Karolyn Grimes, who played George Bailey’s daughter “Zuzu” in the original, will return for the “Wonderful Life” sequel as an angel who shows Bailey’s unlikeable grandson (also named George Bailey) how much better off the world would have been had he never been born.

Grimes, of course, bellowed the iconic line “Every time a bell rings, an angel gets his wings!” in the original movie, about a troubled family man (Stewart) whose near-suicide on Christmas Eve brings on the intervention of his guardian angel.

Farnsworth and Martha Bolton have written the screenplay.

“The storyline of the new film retains the spirit of the original – every life is important as long as you have friends,” Farnsworth said.

No casting decision for the lead role of Bailey’s grandson will be made until February but producers have also begun discussions with original cast members Jimmy Hawkins, who portrayed Tommy Bailey, and Carol Coombs,who played Janie Bailey, to reprise their roles as well.

I guess it could be worse. They could be hiring Samuel L. Jackson as the angel and calling the sequel “It’s a Mother&$*@#& Life.”

I’ve read in a couple of places that they think the rights to this may be in dispute and it’ll likely get caught up in lawyers and red tape. Here’s one time I’m rooting for the lawyers.