Netanyahu Gives Book About The Spanish Inquisition to Pope Francis 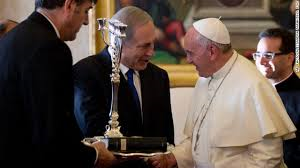 I’ve got to tell you that when I first heard that Benjamin Netanyahu gave Pope Francis a book on the Spanish Inquisition I kinda’ thought that it was a jerky thing to do. And by kinda’ jerky I thought totally over the top jerky. I mean, not as bad as Obama giving the Queen of England cd’s of his speeches but pretty jerky nonetheless.

I thought that perhaps the Pope should’ve given Netanyahu a dvd collection of Adam Sandler movies as signifying the contribution of the Jewish people. But that would’ve been wrong. And I’m glad I didn’t make that joke because I found out there was more to the story.

It turns out that Netanyahu presented Pope Francis with his father’s book entitled “The Origins of the Inquisition in Fifteenth-Century Spain” which actually refutes that the Inquisition targeted Jews at all. It posited that the Spanish Inquisition was more politically oriented than religious.

Netanyahu wrote on the book: “To His Holiness Pope Franciscus, a great shepherd of our common heritage.”

Pope Francis is reportedly talking about visiting the Holy Land in the near future.