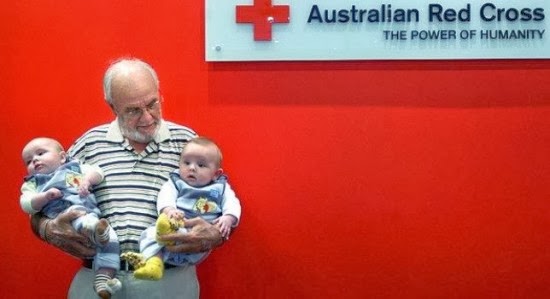 This is a great story.

Oddity Central reports a story about an amazing man. He’s not just special because his blood is rare. It’s what he’s done with it:

74-year-old James Harrison is a superhero in his own right. Granted, he doesn’t wear a cape or spin webs, but he has saved over two million babies’ lives in the past 54 years. And in real life, it doesn’t get cooler than that.

Australian-born James has a very special type of blood – the plasma contains an antibody that cures babies of Rhesus disease, a severe form of anemia. He has been donating blood every few weeks since he was 18 years old, and has done it over 1,000 times now. James never fails to make a donation; even when he’s holidaying, he makes sure to stop by a donor center. “I’ve donated on the Sunshine Coast, South Australia, Western Australia, Tasmania, NSW, wherever I go and I get around the place with the caravan club I’m in.”

“I’ve never thought about stopping. Never,” he said. His initial motivation for donating was a major chest surgery that he underwent at age 14, for which he needed 13 liters of blood. “I was in the hospital for three months. The blood I received saved my life so I made a pledge to give blood when I was 18. I said to my father that I would give blood myself as soon as possible and I stayed true to my word.”

Seems like a wonderful guy. I’m glad I came upon this story.