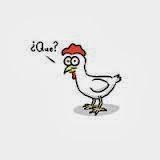 Following a truck accident that killed dozens of chickens last month, a Georgia woman reportedly acting on behalf of PETA has requested that the Department of Transportation allow her to erect a ten foot tall tombstone “to commemorate the lives lost in this deadly crash.”

Sarah Segal wrote that “a relative of the deceased is usually required to fulfill requests for roadside memorials,” but wants them to make an exception for “[t]hese chickens, who spent their entire short lives… on a factory farm before their agonizing deaths.”

A PETA spokesperson said, “the tombstone will offer food for thought in the ‘Poultry Capital of the World.'” Pun no doubt intended. PETA would pay for the memorial, which would also “let people know that the best way to prevent crashes such as this one is to go vegan, because chickens shouldn’t have to make the terrifying trip to the slaughterhouse at all.”

So the death of chickens can be food for thought but not actual food? Come on. If God didn’t want us to eat chickens He wouldn’t have made them out of chicken, right?

If people show up to the memorial service, what are you going to serve them to eat?