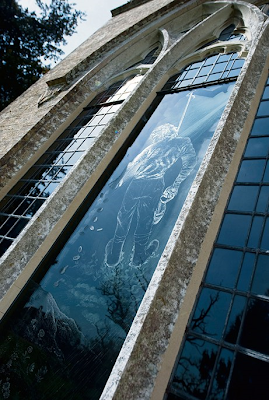 Yup. It’s a picture of Judas hanging himself and the coins dropping out of his hand are turning into flowers. Why? I’m not really sure.

The Church Times reports that the window had been turned down in years past because “church authorities at the time deemed the subject of suicide unfitting.”

Two years ago, the Rector, the Revd Jacqueline Birdseye, and her parishioners re-examined the issue. She said on Tuesday: “It seemed that everybody wanted it to go ahead; we had a PCC meeting, and the vote was unanimous. We spent a long time just making sure that we got the procedure right.

“Back then, many people regarded suicide as an unforgivable sin; but people’s attitudes have changed. I have known several families who have been touched by suicide, and we felt that it was the right thing to have in church. Churches are not just about angels and Easter happiness.”

Yes, let’s put Jesus’ crucifixion and Judas’ suicide on the same plane. That sounds like a brilliant idea. Never mind that Jesus said it would’ve been better if he had not been born.