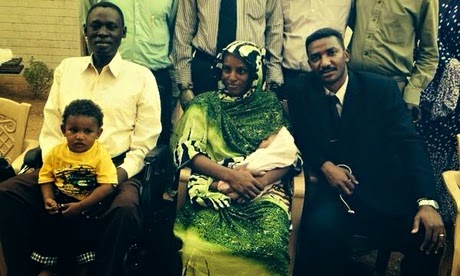 Meriam Ibrahim has been rearrested trying to leave the country.

Meriam Ibrahim, the Christian woman released from death row in Sudan on Monday, was arrested with her husband and two children at Khartoum airport on Tuesday as the family attempted to leave the country.
Agents from the National Intelligence and Security Services (NISS) detained the family just 24 hours after Ibrahim was released on the orders of the appeal court.
Her lawyer, Elshareef Mohammed, who was with Ibrahim at Khartoum airport at the time of the arrest, said more than 40 NISS officers apprehended the family as they attempted to board a plane to the US. Ibrahim’s husband, Daniel Wani, is a US citizen.

“It’s very disappointing,” Elshareef told the Guardian. “They were very angry. They took us [the family’s lawyers] outside, and took the family to a NISS detention centre. They have not been given access to lawyers.”
He said the appeal court had quashed Ibrahim’s convictions and there were no restrictions on her travelling. He added that political differences within the government over the case may have played a part in the decision to prevent her leaving.
“I’m very concerned. When people do not respect the court, they might do anything,” said Elshareef.