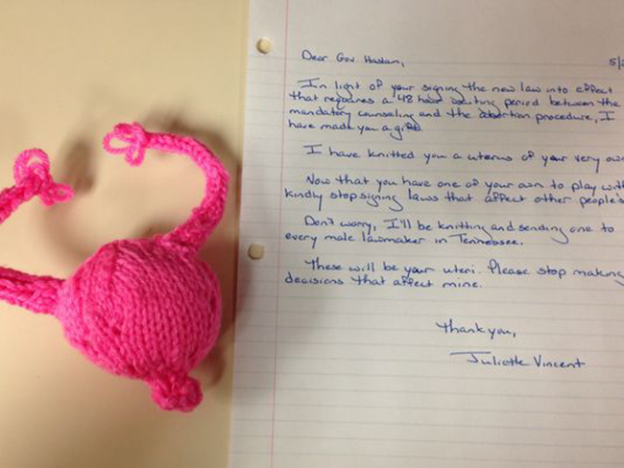 A pro-abortion protester is making her voice heard by sending knitted pink uterus’ to pro-life politicians because of the state’s new 48 waiting period.

Juliette Vincent of Antioch plans to mail knitted uteri to all male Tennessee lawmakers, beginning with Haslam, in rebuttal of the new law.

“It’s all an effort to focus on good things for our state rather than this,” Vincent said.

“It just makes it harder for women who don’t have the means. They’re not getting pregnant and saying, ‘Oh, let me get an abortion.’ There’s a lot of thought going into this.”

Vincent came up with the idea after a discussion on Facebook with a friend. Vincent then made the uterus during a crafting social event with friends.

Here’s a shot of the knitted uterus:

I don’t know. I think if the issue is abortion, I think a politician seeing this is still a bit better: