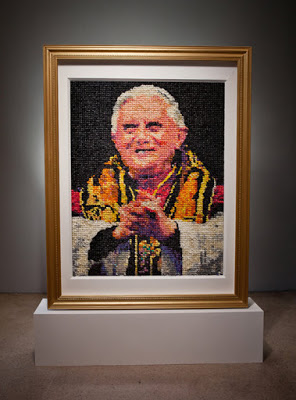 Hey, remember when the New York Times said they wouldn’t publish a portrait of Muhammad because they were all sensitive to religion and all. Well, not so much to Catholics.

In a story about some idiotic museum which accepted a picture of Pope Benedict XVI made of condoms, the paper of religious sensitivity showed the portrait.

The artist hilariously said, “What I want to do is really destigmatize the condom, normalize it.”

Ok. Seriously. Could condoms be any more normalized? That’s like saying we want to normalize the Foreman Grill or cable television. Yeah, we get it. They give these things away in middle school.

We all know what it is. Mocking Catholics is always fair. Catholics are fair game. Why? Because they are the current enemy and need to be destroyed.

Archbishop Jerome E. Listecki of Milwaukee, in a blog post, criticized the museum’s decision to accept the piece, and suggested that artwork about other groups — with Gandhi and an Uzi, Lincoln in Ku Klux Klan garb or Hitler with a scullcap reading the Torah — might not be considered acceptable.