Scariest Headline Ever: “Clown Trying to Lure Kids Into Woods.” 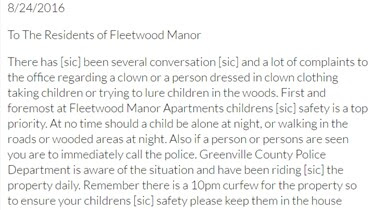 But here’s the interesting part. The apartment complex issued a letter which I put below which warns against “a clown or a person dressed in clown clothing” luring children to the woods.

I’ve gotta know. What’s the difference between a clown and someone dressed in clown clothing? Is there some kind of licensing requirements or is just the fact that the clown is luring children into the woods mean automatically that he’s not a real clown. But if so, the letter shouldn’t say it could be an actual clown. Just someone dressed as a clown.

I say all real actual clowns should then denounce this person dressed as a clown. Or we will be forced to understand that this child luring clown is acting in a way that all clowns support. Which, let’s face it, is probably scarily accurate.

And now, of course, a scary picture of a clown. Because.

You know, on the other hand, it could be a clown that was caught in a clown trap in the woods and is desperately signaling for help. Or worse yet, it wasn’t even a clown but someone dressed as a clown who inadvertently got caught in a clown trap. Wow. Lots of layers to this story. The thing is, and I’m being honest here. If I saw a clown signaling to me in the woods and pointing to a trap that his big ol’ shoe was caught in, I’d still run. I MIGHT call the police. But more likely, I’d just pretend I never saw anything and hope to forget all about it.

I’m not proud of this. I’m just being honest.